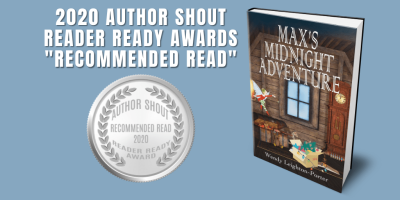 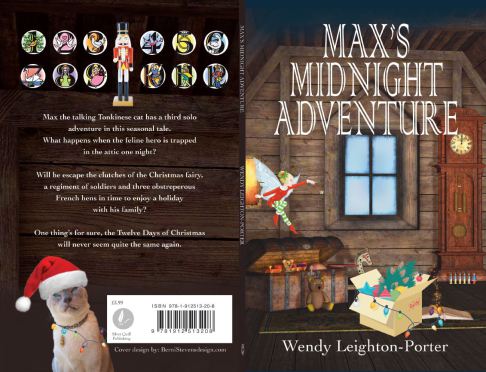 Max the talking Tonkinese cat has a third solo adventure in this seasonal short story.

What happens when the feline hero is trapped in the attic one night?

Will he escape the clutches of the Christmas fairy, a regiment of soldiers and three obstreperous French hens in time to enjoy a holiday with his family?

One thing’s for sure, the Twelve Days of Christmas will never seem quite the same again …

"Max, the lilac Tonkinese cat, is in trouble again in Max's Midnight Adventure by Wendy Leighton-Porter. Following Uncle Richard into the attic, Max does what he loves best and falls asleep in a comfy dark box. When he wakes, he discovers he has gotten himself locked in the now dark attic! Not always the bravest of creatures, poor Max is terrified. Uncle Richard has gone, and Max is trapped in the creepy attic with a cross Christmas fairy that refuses to help him. What other kinds of strange creatures does Max run into? Will they help him or will they ignore him and leave him to fend for himself? When an unexpected source offers his help, Max feels hopeful. Until the toy tells him his plan. Now he must put his fate in the hands of the angry Christmas fairy, a gruff Nutcracker, and a buff action figure that is better at the action bits than thinking. Can he find a way out of the attic before Joe, Jemima, and Uncle Richard go on holiday tomorrow? Or will he be trapped alone without food and water over the weekend? If he can't get out in time, will he survive?
Another heartwarming adventure short story by Wendy Leighton-Porter. Max's Midnight Adventure combines forgotten toys from the past with the magic of Christmas. This is such a cute story. It was enjoyable to see another side of Uncle Richard. It is another perfect book to help you get in the holiday spirit. With a surprise and funny ending, you don't want to miss this wonderful Max's Adventure. Don't forget to read the author's notes. It contains more Christmas-y goodness. A must-read for Shadows Of The Past and Max's Adventures fans!"

"I love author Wendy Leighton-Porter’s style. In just a few lines of dialogue we meet and get to know a variety of characters, from Colonel Nutcracker (a pompous regimental sort) to Tinkerbell (aka Stinkerbell) who is particularly nasty and sarcastic to poor old Max just because he broke her wand by accident (which could have happened to anyone!), to Action Man who can’t stop flexing his muscles and showing off, to the entire cast of The Twelve Days of Christmas … with the French hens going on strike, the nine ladies getting into a huddle with the football team, to absolute chaos and mayhem. This is a wonderful peep into Max’s life that affords lots of laughs, largely due to inventiveness of the author, the hilarious interactions between the various characters, and the ultimate charm of Max, the big-hearted (albeit slightly cowardly) hero of the series."