Max's Royal Adventure is now available on Kindle from Amazon.

The Shadow of Camelot has received 2 medals, a gold and a silver, in the Literary Classics Book Awards 2019.

The Shadow of the Witchfinder is now available from Amazon.

The Shadow of the Volcano has won a bronze medal in this year's Readers' Favorite Book Awards.

The Shadow of the Tudor Rose was shortlisted among the top 6 children's books in this year's Rubery Book Awards.

The Shadow of the Tudor Rose has just won two medals, gold and silver, in the Children's Literary Classics Book Awards

The Shadow of Camelot has been awarded an Honourable Mention in this year's Readers' Favorite Book Awards.

The Shadow of the Two Princes was a finalist in the Rubery Book Awards, reaching the top 5 in the Children's Fiction category.

The Shadow of the Tudor Rose won a Silver Award in this year's Nautilus Book Awards.

All of my books can be ordered from any bookstore, including Waterstones and WHSmith. Alternatively, you can buy them online at Amazon.co.uk or Amazon.com

Five years have gone by in history since the children and Max travelled back in time to 17th century Essex to face the dreaded Matthew Hopkins, otherwise known as the Witchfinder General.

It is now 1651, and England has lost its king. The country is being ruled by his executioners - the Parliamentarians - under the leadership of Oliver Cromwell.

In Max's sixth solo adventure, he has a crucial role to play in one of the most important episodes in English history. Is this expecting too much from our poor time-travelling Tonkinese cat? The answer is no, for the Guardians of Time have handpicked Max for the job and they have every faith that he will succeed in this special mission. 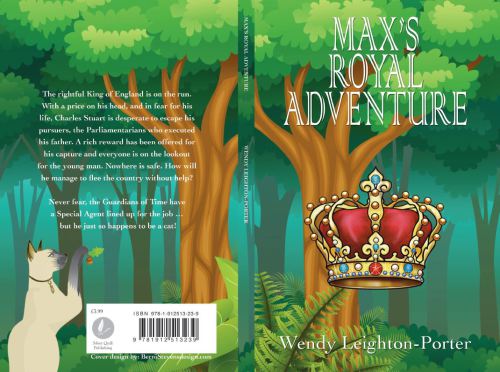 The rightful King of England is on the run. With a price on his head and in fear for his life, Charles Stuart is desperate to escape his pursuers, the Parliamentarians who executed his father. A rich reward has been offered for his capture and everyone is on the lookout for the young man. Nowhere is safe. How will he ever manage to flee the country without help?

Never fear, the Guardians of Time have a Special Agent lined up for the job … but he just so happens to be a cat!

"Again, through the exploits of the endearing Tonkinese cat, Max, Wendy Leighton-Porter has brought to life a significant historical event in a tale that should appeal to all ages. The essence of the gripping story of Charles Stuart's evasion of capture by Cromwell's Parliamentary forces is all here. Entertaining embellishments added by (and including) Max, such as being pelted with acorns by a talking squirrel, will help to hold the younger reader's attention. The writer also makes clever use of the cat's own curiously unfeline personality (he hates climbing trees) to recreate real characters from the past: the future King Charles II, Captain Careless, the Penderel brothers and others. In conjunction with the author's 'Shadows' series, the Max books are, I believe, quite unique in being both enjoyable and educational where history is concerned."